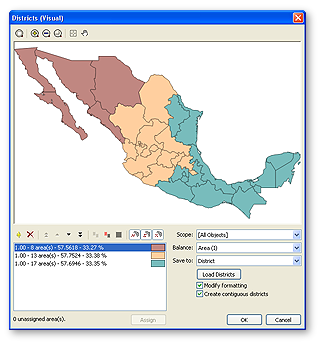 Redistricting using a condensed, expert level dialog. The Districts (Advanced) command takes a set of areas and automatically assigns each area into as many districts are desired. For example, if four districts are desired each area in the set will be assigned to one of the districts. Areas will be assigned so districts will be made up of areas that are grouped together into the district as reasonably as possible. The districts commands in Manifold are used to create districts that represent sales territories, voting districts or other groupings of areas, which might be states, postal code areas, voting precincts or other regions.

The Districts (Advanced) command will also assign areas based on the content of a numeric data field so districts can be balanced by the sum total of that field. For example, areas can be assigned into districts based on the content of a Population field so that the resultant districts all have approximately the same population. Options allow balancing not only so that each district has the same total value of the balancing field but that some districts can have proportionately more or less. For example, the command may be used to create four districts, one of which has twice the population of all the rest. For details, see the User Manual topic: districts_advanced_.htm"> Districts (Advanced)

Redistricting similar to the Districts (Advanced) command but via an easy-to-use visual, interactive dialog. The Districts (Visual) command provides an interactive dialog that allows specifying districts using a point and click visual user interface. In the main display pane the dialog shows a visual preview of the drawing in which districts are assigned. The dialog also lists the districts and relevant data for each district in a districts list pane. Toolbar buttons simplify display and functioning. For details, see the User Manual topic: districts_visual_.htm"> Districts (Visual)

Manifold includes the world's best spatial SQL, a world-class Internet Map Server (IMS), full object library and built-in development environment to create custom applications and GIS-enabled web sites. No need to buy expensive extras or to struggle to integrate separate products. Manifold scales from personal use on the desktop to enterprise use within the largest organizations deploying thousands of users simultaneously editing terabytes of data.

Manifold is a unified package and is not cobbled together from third party code: No need to study a jigsaw puzzle of quirky packages to do what you want. Developed, proven and supported by the same professional team, Manifold's exclusive focus on Windows with perfect incorporation of the latest in modern technology saves you time and money. Install one package and you have it all at your fingertips with no need to spend days playing software integrator to get around the limitations of amateur software or the high costs of legacy software that always wants to charge you a few thousand more for the feature you need.

Manifold's modern technology delivers the most sophisticated spatial analytics in GIS. Legacy GIS packages have legacy limitations, such as separate layers for polygons, lines and points or tedious preparation to assure no overlaps for polygon-on-polygon overlays. Manifold provides a rich selection of spatial engineering tools that automatically handle any topology, no matter how strange, and simultaneously work with mixed polygons, lines and points with automatic blending of mixed database values and mixed projections as well. No other GIS at any price can handle such difficult topological situations automatically.

"Manifold SQL is very fast. I have a Table with 36,961 records. My Query was simple, extract 4 digits for the year from a string making up YYYYMMDD and paste the YYYY into a new column. The Query finished it's work in a second or two, so fast, I had to check that it ran at all."- Manifold user 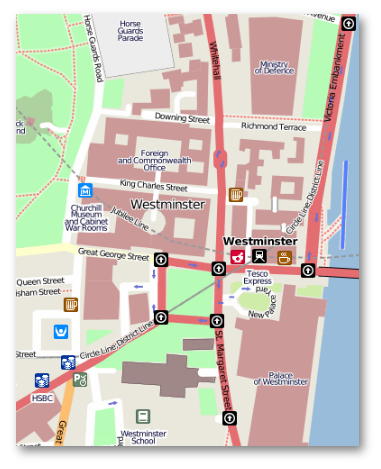