Another large build with many new features for editing.  Major feature additions include metes and bounds and viewsheds.   Links that appear in the list below will jump to topics that have been updated.  Stay tuned for additional updated topics and new videos!  These notes will now include bug fixes as well as new features.

A large build with many new features for editing.  Links in the list below jump to topics that have been updated. For example, see the updated Measurement topic for illustrations of using new editing capabilities.  Stay tuned for additional updated topics and new videos!

Highlights include new query functions to access individual pixels within tiles, improvements to linked LAS/LAZ indexes that implement optimized spatial searches standard within .map projects, a key improvement to folders with layers, and improvements in the object model.

This build continues enhancing the folder system for layers, adding folders to map layer tabs.  It also implements significant internal improvements for performance utilizing memory, and introduces significant changes in various user interfaces for better ease of use and efficiency.  The Layers pane is now a standalone pane, like the Project and Contents panes.  Watershed query functions have been reworked to a more flexible create / use pattern and watershed performance has increased.

A major user interface change:  Windows and panes are now undocked and docked using a Shift-click instead of an Alt-click.

This build provides numerous small improvements to the GUI for faster and easier editing, plus significant enhancements to Watersheds. Feedback on the prior build has been implemented in the Layers pane to support groups planned for the next build, which will feature folders instead of leading layers.

This build provides new, parallel, Watersheds capabilities that are more sophisticated and dramatically faster than prior Manifold generations, while also handling  immensely larger data.  Other highlights include new infrastructure for coordinate system queries and extensive new facilities for measurement, allowing a choice of Euclidean or geodetic measurement.  Work with grouping in the Layers pane continues to more forward as well.

This build or more recent is a must have build to replace all prior builds, for all Release 9 and Manifold Viewer users.  9.0.169 provides truly superior rendering improvements over the prior Official build.  Build 9.0.169 is an Official build. Manifold System 9.0.169 delivers hundreds of enhancements released in the preceding series of Cutting Edge builds.  See individual Cutting Edge releases for details.   A summary of highlights from 9.0.168.1 through 9.0.168.12 can be grouped into eight major sections:

A staggeringly diverse range of visual effects can now be created in Manifold, with examples of bitmap use as seen above from the Example: Use Repeating Images to Fill Areas  topic.

An RGB image of a butterfly as processed by a multichannel RGB Prewitt edge detection filter.  Open a larger version of the above image.

Many improvements and additions in the query engine:

Many improvements for databases:

Extended support for Unicode and Collations:

Many improvements in file / web dataports: 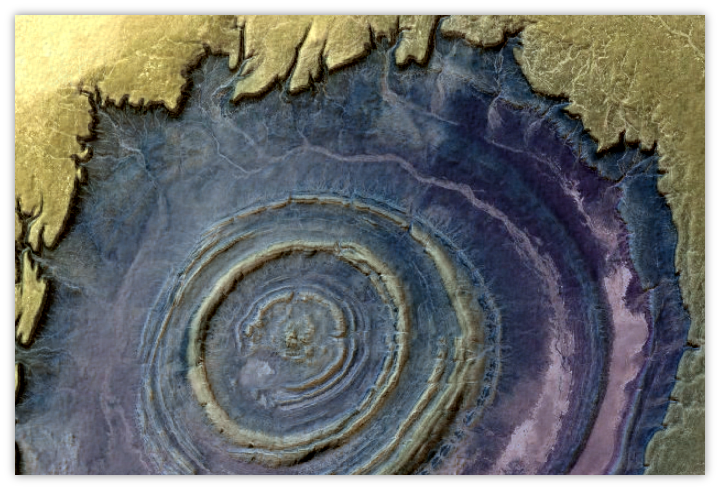 Illustration, above: The Richat Structure in Africa, a blended display using Space Shuttle SRTM terrain elevation data colored and hill shaded, blended with Bing satellite imagery with increased contrast, and enhanced by 7x7 matrix calculation of Curvature, Profile as discussed in the Example: Enhance Terrain with Curvatures topic.  The diameter of the view is approximately 42 kilometers.

A Cutting Edge build with numerous internal improvements to rendering.  This build represents a new generation in display quality, as rendering improvements are truly wonderful.

This build provides a dramatically new Schema dialog with numerous enhancements for field and Index creation, including computed fields and fields with constraints.  The new Schema dialog allows use of the same interface and commands, learned once and used in many settings, to manipulate table schemas both within Manifold and also within a variety of popular DBMS packages, providing options and settings that are automatically configured for the varying capabilities of different DBMS packages.

-- prepare to convert coordinates from drawing to image

Following is a summary of breaking changes to query syntax in 9.0.168.   Queries written in older versions which use features listed below must be adjusted to the new syntax to work in 9.0.168 and subsequent builds.

Query parameters now use @ as a prefix.

Function parameters now use @ as a prefix.

EXECUTE requires either writing query text within [[ ... ]] brackets, or using the name of an existing query.

Previous forms of syntax that allowed using EXECUTE without leaving the scope of the current query have been removed and can no longer be used.

Expressions for computed fields and constraints use [[ ... ]].

For more details, see cutting edge threads in the forum for builds leading up to 9.0.168, for example, the thread for build 9.0.167.6.  The query builder lists all of the above changes plus new statements (VALUE, TABLE, SCRIPT) plus new functions.