The visualization capabilities of Manifold using the Style pane can be exploited to provide many visual effects.  This topic provides some examples of how to use Style in unexpected ways to create a range of more elaborate effects.   By presenting miscellaneous techniques we can stimulate creativity in using Style.

The key idea for most of these tricks is to make duplicates of data so that multiple versions of the same data can be stacked as layers in a map with each drawing formatted differently and, if necessary, offset using the Shift template in the Transform pane.

Important: While there are effects that can be achieved by using multiple drawings based on the same table with each drawing formatted differently, when we use Shift we must make sure to copy both the table and the drawing so that what is shifted is a different data set from the original.

The examples below assume we are familiar with using the Style pane to change formatting in drawings.

We can use the  Point rotation property in the Style pane to create custom effects for point symbols.

The three illustrations below show the same drawings as the illustration above, but with default formatting altered by using the Style pane and overall background color set using Layers Pane. 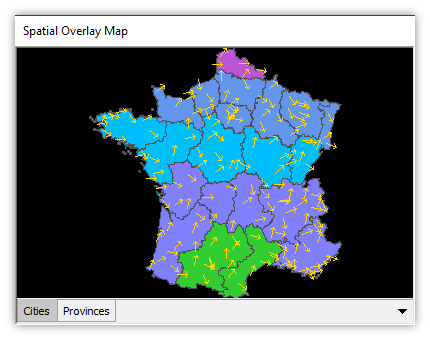 In the above illustration points are all set to use the same icon and color, with thematic formatting also used to specify the background color of areas.  Layers Pane was used to set light beige background color for the drawings.  This illustrates how the square icons look without rotation.

In the above illustration when square icons are used for points but with a Point rotation of 45 they appear as diamonds.  There is also a diamond symbol we could use for the points, without needing to use rotation.   Area borders are set to use a dotted line style and the same color is used for all areas.  The Layers pane was used to set light blue background color for the drawings.

In the above illustration all points use a Point rotation of 180 degrees to flip the default triangle style used for points.

We will create a drop shadow effect to give the appearance of three dimensionality to areas seen in a map.    This is a limited effect as it tends to look best in only a limited range of zoom levels, but for that limited purpose it looks very good.

We begin with a drawing called Regions of the regions of France shown as areas, seen in a map below.   We have used the Layers pane to set the background color to a calm beige.

We then press Ctrl-C to copy both.

We drop the new Regions 2 drawing into the map.   Since it is an exact copy, including formatting, of the Regions drawing there is no visual change in the map.  With the Regions 2 the active layer, we choose the Style pane.

We use the Style pane to change the fill color for areas to black.

The Regions 2 layer now appears as a completely black display.   It exactly covers the Regions drawing underneath.

With the focus on the map window, in the Transform pane we choose the Regions 2 drawing, and then we choose the Geom field in that drawing.   Next, we double-click the Reshape template to launch it.

In the Reshape template we choose the shift operation, using 10000 for X and -10000 for Y and choosing Meter as the unit of measure. We choose Same Field as the Result destination, thus updating the geometry field for the Results 2 drawing in place.

This moves the Regions 2 drawing down and to the right relative to the Regions drawing by the specified amounts.

Press Preview to see a preview.

Manifold immediately shows a preview using blue preview color to show how the Regions 2 objects will be shifted.  The preview layer is drawn on top of all other layers.   We can pan and zoom in for a closer look at the effect.

In the illustration above, we have zoomed into Brittany and Normandy.    We have also right-clicked onto the blue preview caption bar and have chosen 50% opacity for the preview, so we can see through the preview layer to the map below, to see how much shift will happen when we apply the transform.

How do we know the right amount of shift to use?   We can experiment and see what the preview looks like in the map.

Press Transform to apply the operation.

The map updates and we see that the lower drawing, the all-black Regions 2 drawing, has been shifted to the right and down, thus providing a 3D-like effect of a drop shadow or solid edge, as if the areas were cut out of some material with thickness.

We can see how the technique works by zooming far into the upper edge of the areas.   The lower, black layer has been shifted relative to the upper layer.   The effect breaks down when the display is zoomed too far into the scene but it works remarkably well to generate screen shots that can later be utilized in graphics editors.

We can also extend this technique by using additional layers. 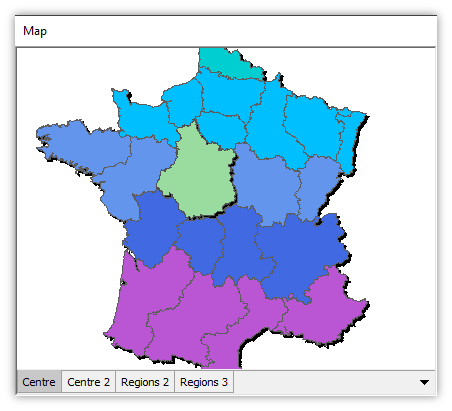 In the illustration above, zoomed in slightly to show the effect better in a small illustration, we have made two more copies of the Regions drawing and in both we have deleted all areas but the area for the Centre region.  The lower Centre 2 drawing has been formatted with black fill color and gray stroke color.   The upper Centre drawing has been formatted a light green, with a faint inner border effect, and then Shifted upwards by 10000 Y units and to the left by -10000 X units.  The result emphasizes the Centre region as if it has popped out from the other regions.

To create the illustration above, we have also pressed the Symbol button for areas in the Regions drawing to drill down into the Symbol dialog and to set the Stroke width for areas to 0.2, resulting in thinner area border lines.

Historical regions - The illustrations in this topic use data from the US government, which show the regions of France as they were before 1 January 2016, when regions in France were reduced from 22 to 13.  Using more regions makes for a more interesting map.

Wasteful of Storage? - When drawings are created using the same geom in the same table they require essentially zero extra storage.   We can style each drawing differently to get the effects seen above.

Take it easy - Stacking layers using different formats is a great way to create useful effects but, when overdone, can result in ugly and confusing displays.  Use with restraint.

Example: Style Pane Quickstart - A tutorial introduction to using the Style pane to apply color, symbology, size and rotation to areas, lines and points in drawings.

Example: Format the Size of City Points by Population - A common GIS task is to format the size of points in a drawing based on some value.  For example, the size of points that represent cities might be formatted based on the value of the city's population, with cities that have larger populations being marked by larger point icons.  This is an example of thematic formatting and is easy to do using the Style pane.

Example: Add, Delete and Edit Thematic Formatting Intervals - This topic provides a step by step example of adding, deleting and editing intervals in the Style pane that are used for thematic formatting.

Example: How Not to Format a Drawing -  When using Style to format a drawing it is a really bad idea to use the same color for objects that is used for the background color.    It can also be a bad idea to use transparent color.   This topic illustrates why.