The Overlay template appears in the template list when a geometry field, of type geom, geommfd, or geomwkb, has been picked in the Transform pane.  The Overlay template provides ESRI-style topology overlays using four different operations: identity, intersect, union, and update.

Overlay template operations act on the source drawing to produce a modified source drawing result based upon patterns in the overlay drawing.  Overlay operations change the geometry, that is, the number and shapes of objects, in the result.    See the Topology Overlays topic for an illustrated, conceptual guide to topology overlays. 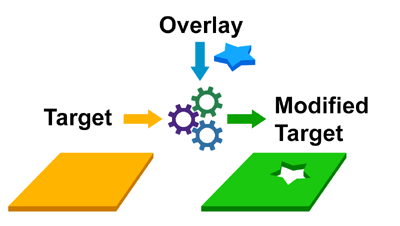 Examples utilize two sample drawings,  Source Yellow and Overlay Blue, and show the result of different overlay operations between them.

The Source Yellow drawing consists of two areas that have been individually styled in different shades of yellow using Style overrides, with a Name field giving the name of the color.

The drawing Overlay Blue drawing contains three areas that have been individually styled in different shades of blue using Style overrides, with a Name field giving the name of the color.

Curvilinear segments - As a practical matter, most people doing GIS will use straight line segments for lines and areas.   Few GIS systems do a good job of supporting curved segments, so there is much less data published using curved segments.   Manifold's ability to work with curved segments allows us to use that data within Manifold in a limited way, at least for display and interactive editing.

However, most processing tools in Manifold, such as Transform templates and various Geom SQL functions, do their work by first converting a curvilinear segment into a straight line segment between the same two start and finish coordinates.  That will often lead to weird or otherwise unexpected results.  To avoid such problems, first convert curvilinear segments into equivalent constellations of straight line segments at whatever resolution is desired, using the Clean transform template with the convert curves to lines operation option and the number of linear segments desired to approximate the curve in the Curve limit parameter.   See the Curved Segments discussion in the Drawings topic.

Two meanings of "intersect" - There are two notions of what "intersect" should mean, both of which are used by Manifold.   Topology overlays, as discussed in the Topology Overlays topic, use the classic set-theoretic meaning of "intersect," in which objects that are entirely contained by other objects are said to intersect as well.   A different meaning is used in Select pane templates and spatial joins in Join, where an object that is entirely contained within another object does not "intersect" that object but is contained by that object.  In the Join dialog and in Select pane templates, an object only intersects another object if some part of the object is outside the other object and some part is within the other object.   This allows the use of contained and containing to provide different selection criteria instead of simply duplicating what intersect does in a selection.

It is easy to take for granted the meaning of such common words but all the same there are a few technical nuances in spatial overlays as follows:

Consider the following example diagram, where the rectangular yellow area is in the target drawing and the other objects are in green, purple and blue overlay drawings.  The small diamond, and small circle shapes mark the location of point objects.   The black line, purple line, and right-angle green line objects, and the purple square and purple diamond point are placed directly upon or incident to the boundary of the yellow area.

The geometric relationships seen above:

Points that are located on the boundary are adjacent to the yellow area, so the purple diamond point is adjacent.

Example: Overlay : Intersect - In this example we use the Overlay : intersect operation in the Transform pane to trim a drawing of points so that all points which do not fall within areas in a second drawing are deleted.   At the end of the topic, we repeat the operation using the Join dialog in a different approach.