The Sieve template appears in the template list when a raster tile field, of type Tile, has been picked in the Transform pane.  The template performs a sieve operation on an image channel, running  until there are no more areas to merge.   In English, sieve is pronounced "siv", to rhyme with "give". 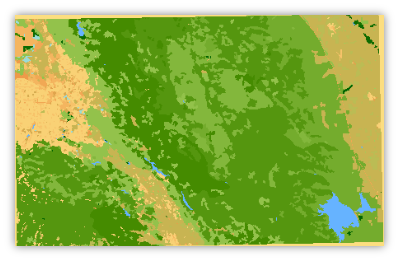 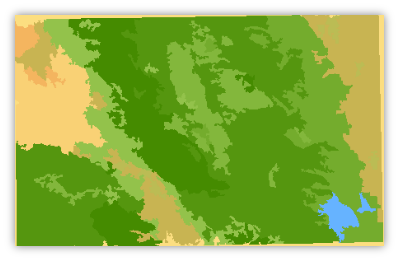 Consider a raster image that shows land use and land cover (LULC) data as pixel values, an image similar to that used in the Example: Trace Vector Areas from Raster Pixels example.

The image above has a single channel.

With the focus on the LULC Raster image, in the Transform pane we choose the Tile field and then the Sieve template.

In the Sieve template, we choose channel 0 for the Channel and we use the default 1 for Similarity.  We use the default 100 as the Minimum area, meaning we intend to end up with regions of pixels that all are at least 100 pixels in size.

If we would like to see a preview, we can press the Preview button.

If we like, we can change the Minimum area threshold to 1000 and then press Preview to see what that would do.

Using a higher threshold will eliminate all smaller regions that are less than 1000 pixels in size.

Based on the previews we see, we change the Minimum area threshold back to 100 pixels.

A new image called LULC 100 appears in the Project pane.   We drag and drop the new LULC 100  image into the LULC Raster window as a layer.

The image has yet to be styled.  In the Properties dialog for the LULC raster image we copy the StylePixel property value .  In the Properties dialog for the LULC 100 image we add a StylePixel property and then we paste the copied value from the LULC raster image.  That is simply a way of copying the same style from one image to another, so that all the pixels with like values are colored the same in both images.

We can compare the new image, above, to the original image, below.

Both images have exactly the same number of pixels.   The pixel values in the new image have been adjusted so that values for pixels in the old image that formed regions of fewer than 100 images have been altered to be the same as the pixel values in neighboring regions that had more pixels, above the threshold of 100 pixels per region.   The result is that very small regions of like valued pixels have been merged into larger regions of like valued pixels.